If you read all previous posts, you probably noticed a few overarching themes throughout the series: Mobilization, Advocacy, and Scale.

With mobilization, I mean it in a non-traditional sense of the word: the web is becoming increasingly mobile, and this shift changes our efforts to support our users. We need to become mobile — we need to mobilize!

The Swedish term for a portable music player was — freestyle!

I’m extremely excited about our plans to create a mobile support experience that no one has built before. Mozilla Support is already insanely cool to use from your mobile phone, but just imagine how awesome it will be once we hook it into your phone’s notification system and utilize some of the new web APIs we’ve worked on as part of making the web itself the app platform for Firefox OS (and, long-term, for apps across all major mobile platforms). With the direction the web itself is taking through efforts like Firefox OS, the opportunities to create awesome experiences are only limited by your imagination.

The closest comparison to what is happening with the web today that I can think of is the introduction of the Sony Walkman in 1979, which revolutionized the way people listened to music. SUMO is heading in the same direction and this will bring lots of new opportunities to help fellow Firefox users no matter where you are — and the karma this will give you will feel more rewarding than listening to your favorite mixtape!

Over the years, we’ve gotten better and better at distilling user feedback from our support channels and reporting it to engineering and QA so they can prioritize their work on fixing the most annoying bugs our users complain about. Cheng played a huge role in kickstarting our efforts already back in 2008, and today we have a dedicated team responsible for this work. In 2013, we’ll institutionalize User Advocacy and partner even more closely with Product Management, UX, Engineering and QA to deliver on Mozilla’s brand promise: Firefox answers to no one but you.

We’ve already built in hooks to Input in Firefox OS so we can ensure high quality user sentiment and feedback reporting for the first handsets once we launch. Of course, our user advocacy efforts will go beyond our internal feedback tools — we’ll also be monitoring press, blogs, forums and social media throughout the product launch to make sure we aren’t missing anything. Our goal here is the same with Firefox OS as it’s been for desktop and Android Firefox: to proactively support our users by making our products better.

This is the glue that will tie it all together — at the end of 2013, our hope is that we’ll be able to look back at a year with significant community growth and where contributions went from just something you could do in front of your computer to something you could do anywhere you are as long as you have your phone with you.

We have awesome people in the SUMO community already — people like Alice, feer56, Scoobi, cor-el, Satdav, madperson, iamjayakumars, jscher2000, Tobbi, underpass, Swarnawa, smo, Nukeador, michro, and many many more (this is really just a sample of our incredibly passionate community!). At the end of 2013, I hope that these people will have taken even more ownership in their various areas of our support efforts — and I hope I’ll be able to list even crazier and impossible to pronounce forum nicknames for new people who joined our community this year!

As part of our quest to grow our community, we need to challenge our assumptions and traditions and be open to completely new processes and community governance models to scale our work to Mozilla’s growing product line. I’m envisioning a community where hundreds of people around the world help with everything from writing support articles that are read by tens of thousands of users, to helping users directly where our users are — the forum, social media, and in person. While I’m incredibly proud of the community we’ve been able to build so far around SUMO, I know we can do more. 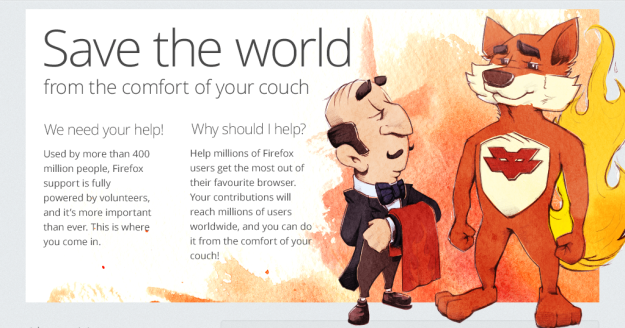 SUMO superhero and his butler — awesome artwork by Sean Martell.

Thanks for reading thus far. If you haven’t already, please join our community and help us shape the future of the mobile web, get more involved with Mozilla, and help our users! It’s dead simple, fun, and can take as little as a few minutes to make an impact to thousands of people around the world.

Congrats, you made it to the end of the blog series about our Mozilla Support goals in 2013!